Storytelling in a Snap(chat): How Brands Are Using Snapchat to Connect With Audiences

A great marketing story is only great if it reaches its audiences – which means that in most cases, the storyteller matters just as much as the story.
That’s why all marketers are looking for new ways to become better storytellers, to differentiate themselves in the market place and find that unique way to capture not only attention, but also market share.
One of the newest storytelling vehicles marketers are attempting to steer is Snapchat, the app that has taken the social media world by storm. With almost 50% of 18-24-year-olds fans of Snapchat, and 700 million+ “snaps” sent every day, it has quickly become one of the most popular apps out there for iPhone and Android users alike.* 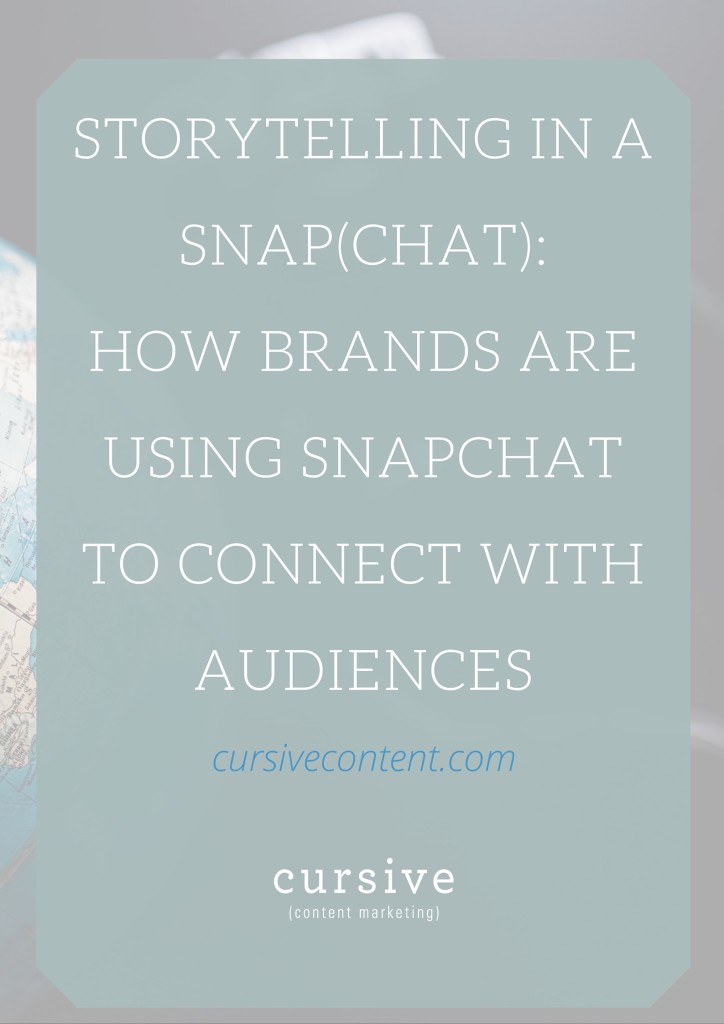 Why? Snapchat harnesses the power of spontaneity and brevity by allowing users to quickly snap a pic; edit it with filters, drawing and captions; and send it to a recipient or recipients to be viewed from anywhere from 1 second to 10 seconds.

So why is this important to marketers?

Marketers can capitalize on Snapchat’s instant-gratification platform by using spontaneous, creative snaps to connect with users on a more intimate yet casual level.
By creating creative and appealing messages in a snap, marketers let consumers decide whether or not they want to engage with the ad. In addition, the brevity of the ad creates urgency, which spurs consumers into action.

Here are some examples of brands Snapchatting the RIGHT way:

Fashion designer Rebecca Minkoff used Snapchat to offer followers a sneak peek of her collection before it hit the runway.

This is an appealing way to get the fashion-obsessed to engage with the brand, because it offers them insight into the brand before the public. Her fans then feel an inside connection to her upcoming line – and potentially share their enthusiasm with friends, or decide to make a purchase.
Grub Hub, an online food-delivery service, also captured the power of Snapchat by posting a challenge to its followers via a Snapstory (which is a photo or video you post to your Stories feed, allowing the snap to live for up to 24 hours).

When consumers completed the challenge, they snapped Grub Hub back, for a chance to win free food. This engaged Grub Hub’s consumers and reached its target demographic of young adults.
Other brands that recognized the potential of Snapchat include Audi, Free People and even the NBA.
Audi used Snapchat to engage users during last year’s Super Bowl by sending them stock photos with hilarious captions, calling their campaign “All the news that isn’t football”.

The campaign gained 37 million impressions, and introduced a new demographic to the luxury car market.
Free People used Snapchat by snapping behind-the-scenes footage of their upcoming line and photo-shoots. The NBA followed the sneak-peek tactic, by snapping a totally different perspective of the latest NBA draft than was shown on television, and by sending a snap video of an exclusive interview. This was definitely a slam-dunk ad move.

These brands have something in common besides their ad platform, however. They all understand that Snapchat is a platform for a younger demographic – a demographic that expects brands to reach them where, when and how they want.
By using a platform that this demographic finds comfortable and fun, uses daily and loves, these brands truly upped their storytelling game.

Ready to give Snapchat a try?

If you’re thinking about using Snapchat, first consider the audience. This is a young crowd, so if that’s not your demographic, don’t jump on the Snapchat trend just because it’s, well, trendy.
In addition, ask yourself what you’d want to achieve with each snap. Free People, NBA and Rebecca Minkoff all wanted their consumers to feel like insiders, and so they snapped sneak peeks and insider looks. Audi wanted impressions during the Super Bowl, and so to take attention away from the main event, they had to find another way to entertain consumers.
Don’t just Snapchat in order to Snapchat. Think creatively and strategically in terms of what you want your audience to take away from your insta-marketing.
Want to learn more about Snapchat, or need help developing a Snapchat strategy for your brand? Contact us to get the snaps going!
(statistic sources: 1, 2, 3, 4, 5)
[question]About The Author: Cursive’s fall intern Colleen Sweeney is a senior at Fairfield University, majoring in Marketing with a concentration in Integrated Marketing Communications and a minor in Communications. She has a passion for marketing and advertising, specifically understanding consumer behavior.[/question]