doctor to prescribe prednisone https://canadaonpharm.com
Why It May Be Risky To Buy Antibiotics Online in antibioticsonlinerx.com Just like with any other medications, taking antibiotics without prescription can be hazardous for your health. That’s because you might not know what therapeutic doses are advisable in your case. This may produce a negative impact on your health in a number of ways. What’s more, there are lots of other risks associated with buying antibiotics online. These include the following: If you perform a self-diagnosis of viral infection, it means that the risks of taking wrong antibiotics will be high, and this may lead to antibiotic resistance. As such, it is advisable not to self-diagnose any bacterial diseases, but always see a doctor to undergo a proper medical exam and find out what drug will be useful in your particular case; Besides, if you intend to use antibiotics for viral infections, you need to know that it can bring more harm than good just because the use of these drugs is often associated with adverse reactions that might require getting emergency medical help. For this reason, there is always a risk of not getting timely help but developing serious health complications that might be hard to tackle;

7 Ways to Get the Most from LinkedIn Groups 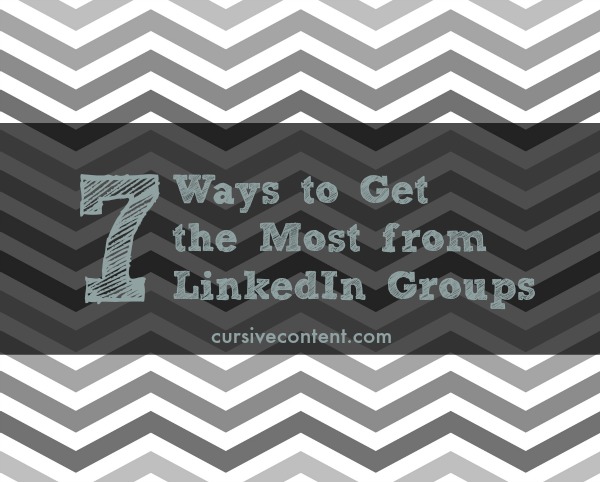 LinkedIn usage is on the rise.
According to a recent survey:

These stats make it seem that people are really taking advantage of LinkedIn’s content marketing power. Yet despite all these stats about growth, there was one area where the survey indicated a slowdown: In 2013, 60% of people called LinkedIn Groups one of their favorite features. In 2014, only 42% called posting and participating in Group discussions one of their favorite elements of LinkedIn.
What changed? LinkedIn Groups are an outstanding way to connect with new audiences, to showcase your expertise, to engage in relevant discussions with a diverse audience and, ultimately, to grow your business. It’s a little shocking that they’ve suddenly fallen from favor.
It’s hard to know why it happened, but I’d guess it centers around one thing: it takes work to do LinkedIn Groups right. You can’t just link drop and run. Finding groups that are relevant, interesting and active takes some time. LinkedIn’s SWAM (sitewide automatic moderation) policy has gotten stricter and its impact felt more widely. That means that crafting a post takes more thought than it used to. But groups are still worth the effort, and if you’re not seeing a good return on your time investment, its time to reevaluate your approach.
Here’s seven pieces of great advice from some folks who have maximized the potential of LinkedIn Groups:

Create your own group

“To truly build community, companies are often best served [by starting a LinkedIn Group] for a very specific group of people with whom the company hopes to engage and — crucially — who would find value in engaging with one another, and having your company facilitate that connection” – Sam Ford, Peppercomm, via CIO

“Nothing is worse in a group than a member who constantly “spams” discussions with his direct advertisements for products or services, or starts discussions with direct-sales tactics, pitching what he’s selling. Linking to a blog and asking a question around your own content are both fine, but the quickest way to get kicked out of groups is to constantly pitch your stuff. And don’t focus solely on sharing your own content! This is a community, after all, so comment on and share other people’s articles in your status updates; it’s a great way to build out your network and start more conversations.” – Matt Haskell, Marketing Profs

Create opportunities for connection outside of the Group.

“Once you’ve been interacting with someone in your Group, and you’ve built up some familiarity, send them an invitation to connect on LinkedIn. Make sure to let them know why you want to connect, and remind them of your interaction in the Group. If you have been interacting with someone on numerous occasions in a Group, connect with them on Twitter or find their business page on Facebook.” – Kristen Curtiss, Constant Contact

Use Groups to Explore Users

Did you know that if you’re a member of the same group as another user, you can bypass the need to be a first-degree connection in order to message them? In addition, group members are also able to view the profiles of other members of the same group without being connected. Join more groups to enable more messaging and profile viewership capabilities. – Pamela Vaughan, HubSpot

Remaining active within your Group is the number one most important thing you can do to maintain and increase traffic. Make sure you participate in the discussions you start. Don’t post a topic for the day and think you’re finished. If you find that you don’t have the time for maintenance, assign Group upkeep to another person within your company. – Bill Faeth, Inbound Marketing Agents

While viewing a group’s page, scroll down below the “Top Influencers of the Week” chart on the right-hand side, and click on the Group Statistics box (note: the group members number in the graphic is a generic design and isn’t representative of the group’s actual statistics). Here, you can view the group’s demographics, growth, and activity. You can use these tools to compare demographics with your target audience, check for sufficient and consistent growth, and analyze the group’s communication between members. – Alex Sobal, Weidert Group

“…you are far more likely to get positive feedback, not to mention generate leads, from a post that includes a question in it. – Cindy King, Social Media Examiner
Want more insight and advice on how to make LinkedIn a powerful part of your content marketing plan? Head on over to Cursive’s Pinterest page, where we’ve curated a board full of outstanding LinkedIn resources.