Writing Is Hard. And If It's Not, You're Doing It Wrong. 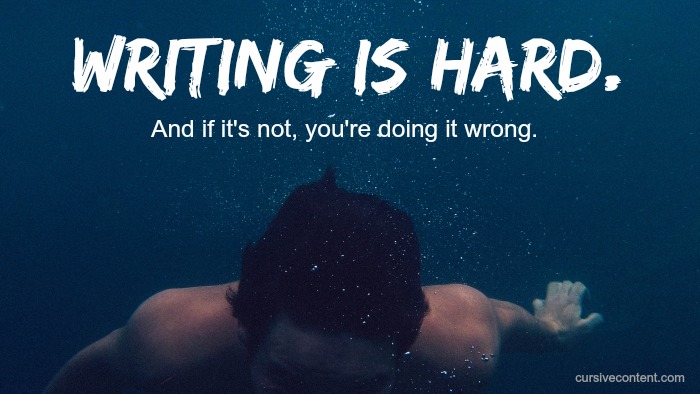 “Nothing any good isn’t hard.”

Five simple words, yet they hit like a punch in the gut.
They’re the words of the great American author F. Scott Fitzgerald, and when I stumbled upon them in an old Brain Pickings post this week, I thought: “Yes. Finally.” Because these 76-year-old words perfectly express all the feels I’ve been feeling about writing in the digital age.
The article, “F. Scott Fitzgerald on the Secret of Great Writing“, features excerpts from Fitzgerald’s letter to an aspiring college-aged writer, as well as advice he sent to his daughter Scottie when she enrolled in high school. In both, he shares hard truths about the art of writing.

“You’ve got to sell your heart, your strongest reactions, not the little minor things that only touch you lightly, the little experiences that you might tell at dinner. This is especially true when you begin to write, when you have not yet developed the tricks of interesting people on paper, when you have none of the technique which it takes time to learn. When, in short, you have only your emotions to sell.”

But it’s not good enough. Because writing good content is hard. And it’s OK to recognize that.

Too often, we’re looking for a quick fix. We know we should be producing content, so we want it produced. Past tense. We want it DONE. And in the process, we end up trivializing the hard work of writing.

“Nobody ever became a writer just by wanting to be one. If you have anything to say, anything you feel nobody has ever said before, you have got to feel it so desperately that you will find some way to say it that nobody has ever found before, so that the thing you have to say and the way of saying it blend as one matter—as indissolubly as if they were conceived together.”

And to take Mr. Fitzgerald’s advice is hard. To “feel it so desperately” that you have to express your ideas in a new way is a vulnerable place to be. It’s hard work to harness those emotions, those unique thoughts, into the right words on a page. It’s hard work to capture audiences and keep them around. It’s hard work to create something worthy of someone’s time – when no one has time to give.

Writing is hard. But that doesn’t mean it isn’t worth it.

So let’s stop pretending that writing should be easy and instead recognize the art of writing as just that – an art. A brave, vulnerable, worthwhile art.
Writing this was hard – but joining the conversation is not. Share your thoughts on writing in the comments below, or over on Twitter.
(Quotations from F. Scott Fitzgerald: A Life in Letters: A New Collection Edited and Annotated by Matthew J. Bruccoli as reported by Brain Pickings.)