canadian pharmacy express
Why It May Be Risky To Buy Antibiotics Online in antibioticsonlinerx.com Just like with any other medications, taking antibiotics without prescription can be hazardous for your health. That’s because you might not know what therapeutic doses are advisable in your case. This may produce a negative impact on your health in a number of ways. What’s more, there are lots of other risks associated with buying antibiotics online. These include the following: If you perform a self-diagnosis of viral infection, it means that the risks of taking wrong antibiotics will be high, and this may lead to antibiotic resistance. As such, it is advisable not to self-diagnose any bacterial diseases, but always see a doctor to undergo a proper medical exam and find out what drug will be useful in your particular case; Besides, if you intend to use antibiotics for viral infections, you need to know that it can bring more harm than good just because the use of these drugs is often associated with adverse reactions that might require getting emergency medical help. For this reason, there is always a risk of not getting timely help but developing serious health complications that might be hard to tackle;

Why Storytelling Matters To Small Business 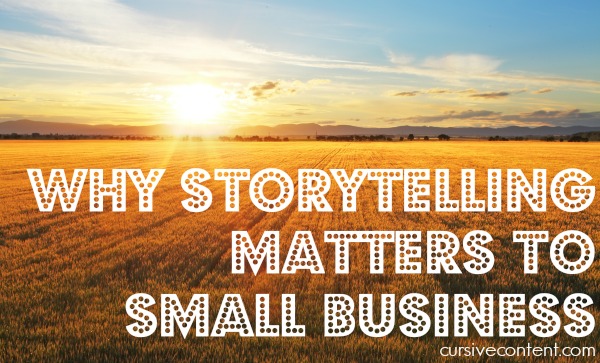 There’s no one who has more stories to tell than my grandfather. He can make conversation with anyone, anywhere. I remember that, as a kid, I used to sit with him on mall benches outside of stores while my grandmother shopped. Before she made it out the door, he would learn the best story the person who sat down next to him had to tell.
It’s a lost art, the art of stories. In the world of 140 characters, of scanning our news feeds for the quick anecdotes that our friends share, we’re no longer getting the full picture.
Our relationships with brands are just the same. For so long we turned away from the corner store and headed to the big box. We wanted more, we wanted it cheaper, and we didn’t care where it came from, or why or how.
But that’s not the case anymore.

The move toward connection

Consider the wildly popular Etsy, a virtual marketplace where individual shop owners sell handmade goods and have the opportunity to tell their shop’s story. In October 2007, they reported around 163 million page views. In October 2013, that number had grown to 1.91 billion.
Think about how popular farmer’s markets have become. In 1994, there were 1,755 farmers markets nationwide. As of 2013, there were 8,144. There’s been a movement towards healthy, natural eating that helped this boom along. But it also stems from a desire to know the story behind what we’re eating. Farmers and ranchers are happy to tell you about getting up at dawn to water their crops, about letting their cows roam in the open fields. They’ve always been storytellers. They know it creates connections and loyalty in ways that no big-budget ad campaign can replicate.

Storytelling with Of A Kind

The online shop Of A Kind makes storytelling an integral part of their approach. Every item sold on the site includes a feature on the designer, along with additional “Behind The Scenes” content. This extra content ranges from an in-depth look at how a jewelry designer recycles materials to the things a handbag designer always packs when traveling.
Co-founder Erica Cerulo found inspiration in the story of a man who sold coffee beans. She explains the story behind the stories to the LA Times: “’There was this guy with roasting ovens who would take his own beans on an airplane. He even had a hand grinder on the plane,’ she says. What she enjoyed was the trust that she now felt for that coffeemaker. If he felt so strongly about his own product, ‘then he would never serve me anything bad.’”
Of A Kind’s unique approach ensures that their customers know the story behind every dress, handbag or piece of jewelry and the designer who makes it. When combined with Of A Kind’s other unique hook—the fact that these designers create limited edition pieces especially for the site—customers are being served exactly what they’re craving.

Small business should be most excited to hear that crafting an authentic and compelling story should be at the top of their marketing to-do list. Small businesses have the stories people really want to hear. The stories people identify with. The stories my grandfather could get out of you if you were on that mall bench.
This doesn’t exclude mega-corporations from the storytelling movement; on the contrary, it does wonders for making them seem more human. But, oddly enough, a company with thousands of humans behind it will fight an uphill battle; it never seems quite as human as a company run by just one.
Although you might feel compelled to brush off the idea of storytelling because it seems like marketing’s latest buzzword, it’s really just a term that captures the zeitgeist. Your customers are craving connection and they want to know your story. So let’s hear it.
Not sure what your story is, or how to tell it? Don’t waste another minute on content that doesn’t get results. Sign up for our Script Your Story Sessions, where we’ll help you develop a straightforward and doable plan for your content marketing efforts.