prednisone online canadaonpharm.com/buy-prednisone-online/
Why It May Be Risky To Buy Antibiotics Online in antibioticsonlinerx.com Just like with any other medications, taking antibiotics without prescription can be hazardous for your health. That’s because you might not know what therapeutic doses are advisable in your case. This may produce a negative impact on your health in a number of ways. What’s more, there are lots of other risks associated with buying antibiotics online. These include the following: If you perform a self-diagnosis of viral infection, it means that the risks of taking wrong antibiotics will be high, and this may lead to antibiotic resistance. As such, it is advisable not to self-diagnose any bacterial diseases, but always see a doctor to undergo a proper medical exam and find out what drug will be useful in your particular case; Besides, if you intend to use antibiotics for viral infections, you need to know that it can bring more harm than good just because the use of these drugs is often associated with adverse reactions that might require getting emergency medical help. For this reason, there is always a risk of not getting timely help but developing serious health complications that might be hard to tackle; 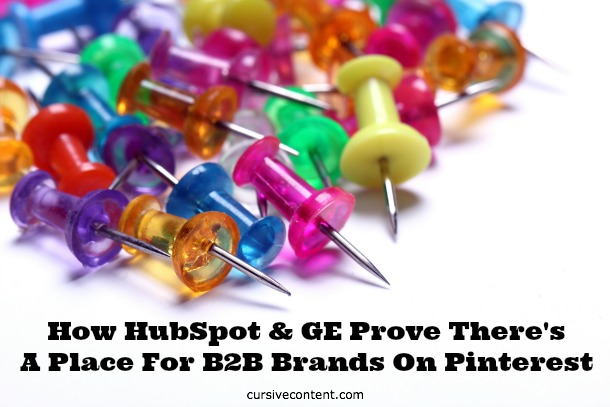 From fashion to home décor to meals that make your mouth water, Pinterest is an eye-catching display of beautiful things. The platform is a no-brainer for B2C brands like makeup giant Sephora, handcrafted goods site Etsy, and recipe resource AllRecipes. Their content inherently has great visuals, typically because their visual is their product. But what about the B2B brand, especially those whose content isn’t always visual, or “pinnable”, by nature? There’s room for them on Pinterest, too—and these brands prove it. 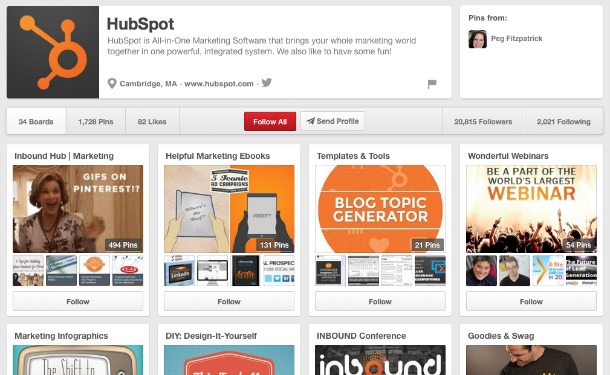 HubSpot’s Pinterest account offers a ton of resources, including e-books, webinars, templates and more, all with strong graphics. They have a fantastic arsenal of content to offer, and what takes their Pinterest presence to the next level is the way their brand personality shines through. The last sentence in their Pinterest bio is “We also like to have some fun!” and they follow that through with entertaining boards like “Awful Stock Photography” and “Bad Marketing Kittens”. It’s not just catchy content; even these just-for-fun boards don’t stray far from the business HubSpot is in. They show their personality in boards like “Behind the Scenes @ HubSpot” and strike a balance by staying strictly business on other boards like “Books for Marketers” and “Wonderful Webinars“.
Overall, HubSpot has managed to make Pinterest a marketing tool that showcases their work and makes you feel like they’d be fun to work with—all despite the fact that they don’t sell a tangible product. As a software company, at first HubSpot would seem like a complete mismatch for a visually-based social network like Pinterest. But with their smart and creative approach, HubSpot proves that’s just not so. 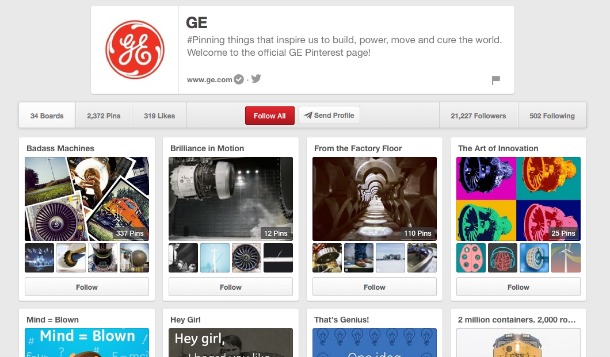 GE’s Pinterest mantra is “Pinning things that inspire us to build, power, move & cure the world.” That sounds outstanding; who wouldn’t want to see what that’s all about? That statement is powerful because it explains what can be expected from GE’s Pinterest account and makes people want to be part of it. Since the GE brand is both B2C and B2B, this type of statement also helps nicely bridge the two.
Their boards range from serious business (such as “Cancer Pintherapy”, a GE Healthcare-focused board) to more light-hearted (“Mind=Blown” includes fascinating science facts). A board named “Hey, Girl” puts a twist on the typical Ryan Gosling memes by, for example, using an image of Edison and the words “Hey girl, no one can hold an incandescent light bulb to you.” GE is jumping on a popular trend while also owning it—a brilliant (yeah, pun intended) implementation of visual content. “Badass Machines” showcases some of the amazing technology GE has developed. All of their Pinterest content works together to push their cool factor equal to their geek factor while showcasing the breadth and depth of their work in ways that can go head-to-head with anything in Pinterest’s stream of visual goodies.

Pinterest isn’t the right answer for every business, but whether you’re an industry giant like GE or a small company, you don’t need to count yourself out of Pinterest simply because you’re B2B-focused. When you’re developing your Pinterest strategy, think about the lessons role model brands like HubSpot and GE have taught by example:

[Tweet “You don’t need to avoid Pinterest simply because you’re a B2B company.”]
Have you encountered any other stellar examples of B2B brands that stand out on Pinterest (or maybe you’re one of them)? We’d love to hear about your favorites and what makes them great.